Why does this gal have so much limited external rotation of her legs?

We have discussed torsions and versions here on the blog many times before. We rarely see femoral antetorsion. She came in to see us with the pain following a total hip replacement on the right.

Have you figured out what’s going on with hips yet? She has a condition called femoral ante torsion.   This means that the angle of the femoral neck is in excess of 12°. This will allow her to have a lot of internal rotation but very little external rotation.  She will need to either “create” or “borrow” her requisite external rotation from somewhere. In this case she decreases her progression of gait (intoed), and borrows the remainder from her lumbar spine.

So what do we do? We attempt to create more external rotation. We are accomplishing this with exercises that emphasize external rotation, acupuncture/needling of the hip capsule and musculature which would promote external rotation (posterior fibers of gluteus medius,  gluteus maximus, vastus medialis, biceps femoris). A few degrees can go a very long way as they have in this patient.

Another tool for you, in addition to making sure the gluten are on line, to improve ankle rocker and hip extension.

What’s wrong with this picture? (Besides the fact that you probably shouldn’t run with your dog on asphalt)

There’s been a lot of incongruency in the media as of late. This particular gal, with your head rotation to the right is going against the harmony of neurology and physiology. Let me explain…

This particular gal, with her rotated to the right is going against the way the nervous system is designed to work.

In a post  in the last week or so (the massage cream one and  incongruent movement) we talked about tonic neck responses. When the head is rotated to one side, that upper and lower extremity should extend while the contralateral side should flex. This poor gal is fighting her own neurology!

Also note that she really doesn’t have that much hip extension on the right and increases her lumbar lordosis to compensate. Gee whizz. You’d a thought they would have done better… 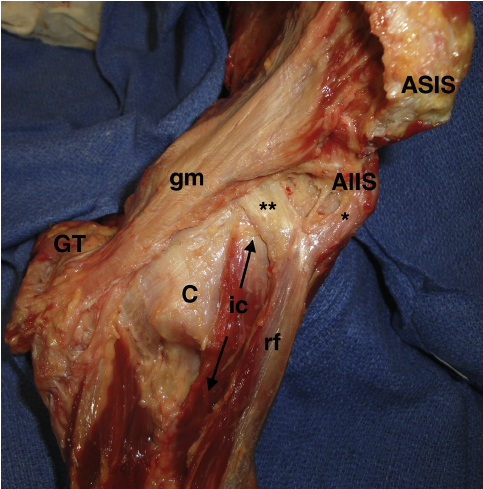 As with many things, one thing often leads to another. I had a patient with anterior hip pain and what i believed was iliopsoas dysfunction, but I wanted to know EXACTLY which muscles attached to the hip capsule, to make sure I wasn’t missing anything.

I turned up some great info, including a nice .pdf lecture, which I am including the link to along with a second paper that began my journey.

I had thought the iliopsoas attached to the hip capsule, but it turns out it doesn’t, but the iliocapsularis does along with a host of others, including one of my favs, the gluteus minimus, which was believed to be part of the psoas, but actually is a completely separate muscle.  Did I mention that these are  FREE, FULL TEXT articles?

Anyway, I began reading, with great interest, about the iliocapsularis and I found yet another great review paper on it, along with mechanical hip pain. This last paper has some real clinical pearls and I recommend reading it the next opportunity you have a bit of time.

I began thinking about when the iliopsoas fires in the gait cycle (terminal stance to mid swing). So, it is firing eccentrically at pre swing (perhaps limiting or attenuating hip extension?), then concentrically through early and mid swing, when it becomes electrically silent. During running gait, the activation pattern is similar. This muscle is also implicated in femoroacetabular impingement (FAI), or more correctly anterior inferior iliac spine subspine impingement (AIIS Impingement) or iliopsoas impingement (IPI). They all can cause anterior hip pain and they should all be considered in your differential.

The iliocapsularis muscle has its proximal attachment at the anterior-inferior iliac spine and the anterior hip capsule and does not attach to the labrum . Its distal insertion is just distal to the lesser trochanter. It can sometimes inset into the iliofemoral ligament and/or the trochanteric line of the femur. It is innervated by a branch of the femoral nerve (L2-4). It is believed to act to raise the capsule of the hip and be an accessory stabilizer of the hip.

OK, there you have it. the iliocapsularis. Another muscle you didn’t know you could access. It pays to know your anatomy!

“Once isolated contraction of the deep external rotator muscles
is successfully achieved, progression can be made to the
rehabilitation of secondary stabilisers and prime movers of the
hip, particularly the gluteus maximus, initially using nonweight
bearing exercises and progressing to weight bearing
exercises once motor control and strength allows. Pre-activation
of the deep external rotators may make these exercises
more effective. Deficits in flexibility and proprioception
should also be addressed at this stage. Once adequate hip muscle
strength and endurance is achieved, functional and sports
specific exercises can then be implemented. ”

Ishial tuberosity pain that looks like a hamstring but is not responding? Think QF.

We have always have found the quadratus femoris is one of, if not the, 1st hip muscle to become dysfunctional in hip pain patients. Perhaps it is due to it being the southern most stabilizer of the deep 6. Long known as an adductor, but also external rotator, we find it is employed eccentrically when the foot the planted and people rotate to the same side as weight bearing, or people take a “sudden stumble” while running. It often mimics an insertional hamstring strain with regards to location. We were happy to see it is getting some of the attention it deserves : )

“The Deep 6” and their “not so talked about” role in the gait cycle.

Excerpted from a recent Dry Needling Seminar in, listen to this brief video and you will never look at these muscles the same way again.

It talks about the lesser known, eccentric role of the deep 6 external rotators during gait. This is really important from a rehab perspective, as these muscles are often neglected in the rehab process.

Do yourself and your clients/patients a favor and watch this informative short so you don’t miss out : ) 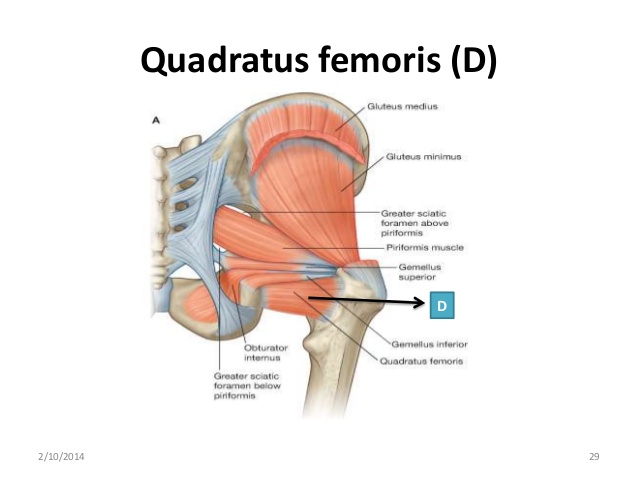 We have always have found the quadratus femoris is one of, if not the, 1st hip muscle to become dysfunctional in hip pain patients. Perhaps it is due to it being the southern most stabilizer of the deep 6. Long known as an adductor, but also external rotator, we find it is employed eccentrically when the foot the planted and people rotate to the same side as weight bearing, or people take a “sudden stumble” while running. It often mimics an insertional hamstring strain with regards to location. We were happy to see it is getting some of the attention it deserves : )

Have a patient with weak hip abductors? Here is a great closed chain gluteus medius exercise called “"hip airplanes” we utilize all the time. Try it in yourself, then try it on your patients and clients, then teach others : )

A profound loss of hip extension…

While sitting on the beach, our mind never rests. Even when on vacation we continue to watch how people move.

Luckily today, I had the gait cam (Dr Allen is holding down the Gait Guys Fort), so live from Sunset Beach, it’s Sunday night. See of you can see what I saw.

Sitting with my wife and watching the kids dig in the sand, this gal with the flexed posture caught my eye.

Why is she so flexed forward? The profound loss of hip extension made it impossible for her to stand up straight! It was difficult to say if she has bilateral hip osteoarthritis, or possible bilateral THR’s (total hip replacements), maybe just really tight hip flexors, painful bunions that do not like toe off, or even all of the above. She may have a leg length discrepancy, as she leans to the left on left stance phase; of course she could have weak hip abductors on the left. It does not appear she has good control of her core.

What do we see?

No one is safe from the gait cam! Stay tuned for more beach footage this week!

We remain, The Gait Guys, even on vacation.