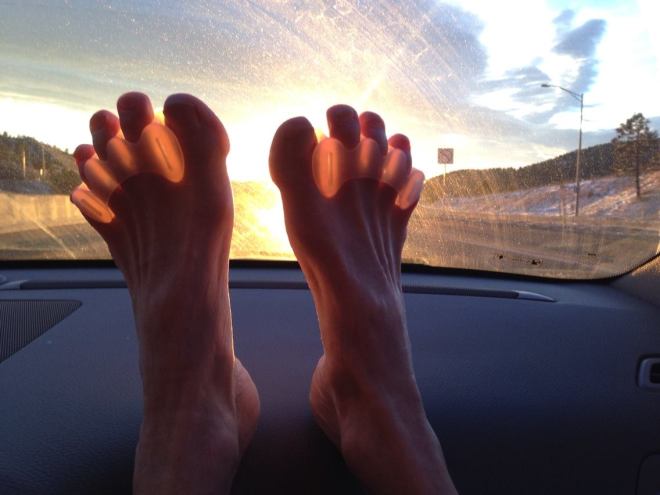 Yay for the lift, spread and reach exercise!

Toe spreads and squeezes are aimed at strengthening specific intrinsic foot muscles—the dorsal and plantar interrosei, according to Irene S. Davis, PhD, PT, director of the Spaulding National Running Center and a professor in the Department of Physical Medicine and Rehabilitation at Harvard Medical School in Boston. Doming or foot shortening exercises contract most of the muscles on the plantar side of the foot, and help to strengthen the abductor hallucis muscle

Everything you wanted to know about the lumbricals, in less than 2 minutes.

Every foot has a story.

This is not your typical “in this person has internal tibial torsion, yada yada yada” post.  This post poses a question and the question is “Why does this gentleman have a forefoot adductus?”

The next three pictures show his anatomically short left leg. Yes there is a large tibial and small femoral component.

The final picture (from above) shows his forefoot adductus. Note that how, if you were to bisect the calcaneus and draw a line coming forward, the toes fall medial to a line that would normally be between the second and third metatarsal’s. This is more evident on the right side.  Note the separation of the big toe from the others, right side greater than left.

Metatarsus adductus deformity is a forefoot which is adducted in the transverse plane with the apex of the deformity at LisFranc’s (tarso-metatarsal) joint. The fifth metatarsal base will be prominent and the lateral border of the foot convex in shape . The medial foot border is concave with a deep vertical skin crease located at the first metatarso cuneiform joint level. The hallux (great toe) may be widely separated from the second digit and the lesser digits will usually be adducted at their bases. ln some cases the abductor hallucis tendon may be palpably taut just proximal to its insertion into the inferomedial aspect of the proximal phalanx (1)

Gait abnormalities seen with this deformity include a decreased progression angle, in toed gait, excessive supination of the feet with low gear push off from the lesser metatarsals.

It is interesting to note that along with forefoot adductus, hip dysplasia and internal tibial torsion are common (2) and this patient has some degree of both.

His forefoot adductus is developmental and due to the lack of range of motion and lack of internal rotation of the lower extremities, due to the femoral retrotorsion and internal tibial torsion.  If he didn’t adduct the foot he would have to change weight-bearing over his stance phase extremity to propel himself forward. Try internally rotating your foot and standing on one leg and then externally rotating. See what I mean? With the internal rotation it moves your center of gravity over your hip without nearly as much lateral displacement as would be necessary as with external rotation. Try it again with external rotation of the foot; do you see how you are more likely displace the hip further to that side OR lean to that side rather than shift your hip? So, his adductus is out of necessity.

Interesting case! When you have a person with internal torsion and limited hip internal rotation, with an adducted foot, think of forefoot adductus!

One way to correct an dysfunctional Extensor Hallucis Brevis

The Extensor Hallicus Brevis, or EHB  (beautifully pictured above causing the  extension (dorsiflexion) of the proximal big to is an important muscle for descending the distal aspect of the 1st ray complex (1st metatarsal and medial cunieform) as well as extending the 1st metatarsophalangeal joint.

Since this muscle is frequently dysfunctional, and is one of THE muscles than can lower the head of the 1st metatarsal, along with the peroneus longus and most likely the tibialis posterior (through its attachment to the 1st or medial cunieform), needling can often assist in normalizing function and works especially well, when coupled with an appropriate rehab program. Here is one way to needle it effectively.

This gentleman, a longtime patient came in for new orthotics, as his old ones were 10 years old. From the pedographs above, you can see it is his LEFT foot.

This case made me think about some common issues that you may be wondering about if you see these folks.

There are several things you should think about:

and what have we been saying for the last several years?

“The development of bone marrow edema after transitioning from traditional running shoes to minimalist footwear is associated with small intrinsic foot muscle size, according to research from Brigham Young University in Provo, UT.

The findings, epublished in late October by the International Journal of Sports Medicine, suggest that runners with small intrinsic foot muscles may benefit from strengthening exercises prior to attempting the transition to minimalist running.

Investigators randomized 37 habitually shod runners to 10 weeks of running in minimalist footwear or their own shoes, and performed magnetic resonance imaging at baseline and after the intervention to detect bone marrow edema and assess intrinsic foot muscle size.

In addition, running in minimalist footwear was associated with a 10.6% increase in abductor hallucis cross-sectional area, a statistically significant change”. 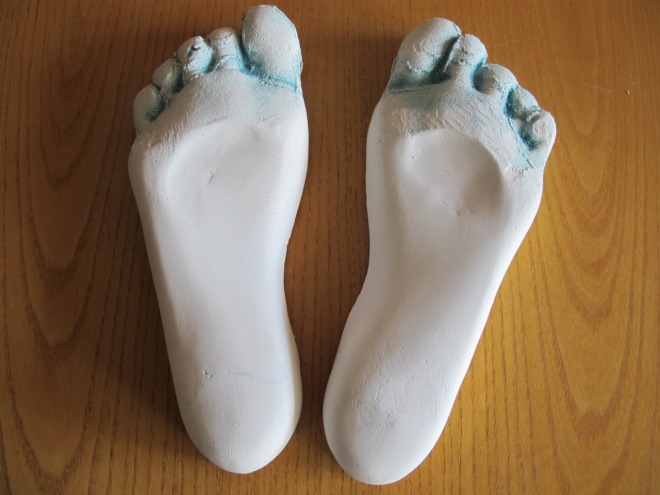 This study prescribed eccentric calf exercises along with either a custom or “sham” foot orthosis for 140 people who were randomized as to which group got the real goods and which one did not.  A Victorian Institute Sports Assessment-Achilles questionairre was given at baseline, 1, 3, 6 and 12 months. No statistically significant difference between the groups.

We wonder just what were the custom and sham like? When we use orthoses, we use full arch contact devices. Perhaps the type of orthosis makes a difference? What has been your experience?

Dr Ivo, talking about some of the finer points on the “Toe Waving” exercise

Welcome to News You Can Use!

Today, Dr Ivo talks about how to test and exercise the long lesser toe extensors to increase skill, endurance and strength.

It will literally take just over a minute of your time. Try it and then go teach others!

News you can use!

Welcome to Monday, folks. In this video, Dr Ivo talks you through The Gait Guys modification of the FIM (foot intrinsic muscle) or what is sometimes called the “short foot” exercise.