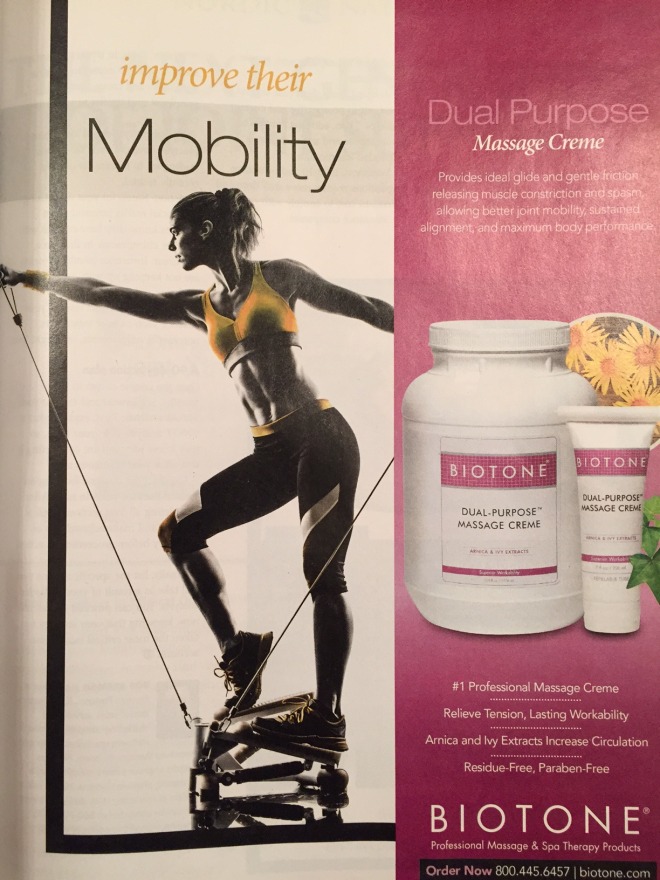 What’s wrong with this picture?

The model is obviously well sculpted and hopefully will paid for the toll that this exercise will be taking on her nervous system overtime. Take a close look at the picture above on the left. Look carefully and what do you notice? Do you see it?

This exercise is neurologically incongruent.  Her right arm is flexed at the same time as her right hip. When does this ever happen in gait?

Do you remember crossed extensor responses or tonic neck reflexes? If not, see here and here. When we walk the right arm and left leg or flexed while the left arm and right leg are extended. During a tonic neck response, and that is rotated to one side the upper and lower extremity (upper greater than lower) should extend on that side with flexion on the contralateral side.

During a tonic neck reflex, the head is rotated to one side the upper and lower extremity (upper greater than lower) should extend on that side with flexion on the contralateral side. In the picture above her torso is rotated to the left while looking straight ahead which is effectively right neck rotation and her extremities are flexed on that side.

In the picture above her torso is rotated to the left while looking straight ahead which is effectively right neck rotation and her extremities are flexed on that side.

Who thinks of these things? Certainly not folks that are paying attention to appropriate neurology and physiology!  Oh yeah, and the ad was for massage cream. Jeez…

A new twist on an old exercise

Do you know the the “Bird Dog” exercise? It looks like the picture above. The upper and contralateral lower extremities are extended, the the opposite ones are flexed. Seems to make make sense, unless you think about gait and neurology (yes, as you can see, those things seem to always be intertwined).

Think about gait. Your right leg and left arm flex until about midstance, when they start to extend; the left leg and right arm are doing the opposite. At no point are the arm and opposite leg opposing one another. Hmmm.

Wouldn’t it make more sense to do a cross crawl pattern? Or maybe like the babies shown above? Seems like if that’s the way the system was programmed, maybe we should try and emulate that. Don’t we want to send the appropriate messages to our nervous system for neurological re patterning? If you are doing the classic “opposite” pattern, what is your reasoning? Can you provide a sound neurological or physiological reason?

Think before you act. Know what you are doing.

The Gait Guys. Bridging the gap between neurology and gait, so you can do a better job.

The Gait Guys are on the case looking at the effects of gait changes following mastectomy just a day after the news of Angelina Jolie’s double mastectomy.

Research has confirmed that following a mastectomy there are limitations in the efficiency of the upper limb and even changes in the posture of the torso. (1,2,3)

Following mastectomy, whether unilateral or bilateral, restorative measures are necessary. From a biomechanical perspective, obviously depending on breast size, removing a considerable mass of tissue is going to change the symmetry of the torso particularly if we are dealing with a unilateral mastectomy.  Not only is it going to change symmetry from a static postural perspective but it will change dynamic postural control, mobility and stability as well as dynamic spinal kinematics.  The literature has even shown that post-mastectomy clients display changes in spatiotemporal gait parameter such as step length and gait velocity.

Breast tissue moves. It oscillates a various cycles depending on speed of walking or running.  There is a rhythmic cycle that eventually sets up during walking and running and the cycle is intimately and ultimately tied to arm swing.  Thus, it would make sense that removing a sizable mass of tissue, particularly when done unilaterally, will change the tissue and joint rhythmicity. And if you have been here with The Gait Guys for more than a year you will know that impairing an arm swing will show altered biomechanics in the opposite lower limb (and furthermore, if you alter one lower limb, you begin a process of altering the biomechanical function and rhythmicity of the opposite leg as well.)  Here are 2 links for more on these topics, Arm Swing: Part 1 and Arm Swing: Part 2, When Phase is Lost. Plus here from our blog search archives, everything we have talked about on Arm Swing.

Arm swing impairment is a real issue and it is one that is typically far overlooked and misrepresented. We are currently working on several other blog posts for near future release including walking with a handbag/briefcase, walking with a shoulder bag, walking and running with an ipod or water bottle in one hand and even spinal symmetry changes from scoliosis that can either consciously or unconsciously alter arm swing and thus global body kinematics.  (We have also noted changes in opposite leg function secondary to a frozen shoulder (adhesive capsulitis) and we have that blog article in the works as well.)  The bottom line is that because of the neurologically embedded crossed extensor reflex and cross crawl response that permeates all human locomotion, anything that changes one of the limbs, whether it be a direct limb issue or something to do with the stabilization of the limb (as in this case the breast/chest wall), can and very likely will impair and change locomotion and motor pattern choices and programming.

Obviously the degree to which intervention is taken depends on the amount and location of breast tissue removed and intervention will be determined by physical placement of the prosthesis (whether it be external or internal) as well as the prosthesis weight, shape and possibly several other independent factors such as comparative support to the chest wall in comparison to the opposite breast. (In another future blog post we will address other methods of intervention such as latissimus dorsi relocation to reform the breast mass. This deserves a blog article all on its own because taking away a major shoulder, scapular and spinal stabilizer and prime mover has never made sense to us clinically or biomechanically.)

In Hojan’s study (below) they found significant differences in the gait parameters in the younger age groups with and without breast prosthesis however there appeared to be no significant differences in the women of the older study group.  However, it appeared that their study did not take into account all of the intimate issues we talk about in gait here on The Gait Guys blog. None the less, in the younger and likely more active study group, the use of a breast prosthesis brought the gait parameters closer to the healthy control group, as we suspected.

Bottom line, every external and internal parameter that changes affects the human organism and thus affects their gait.

Again, here are those links to our other blog writings on arm swing that are paramount to understanding what we are discussing here today.

From our blog search   http://thegaitguys.tumblr.com/search/arm+swing

Shawn and Ivo, The Gait Guys

Neuromechanics Weekly: Gait and Running and the Crossed Extensor Responses

This week we discuss why upper and lower limbs are paired in gait, and the neuronal wiring that is involved.

Yup, this is pretty geeky stuff, but geez…isn’t it nice to know WHY something works? Think of the implications if YOU DON’T see the upper and lower limb pairing. Think of the implications during rehab. One limb SHOULD be doing the opposite of the other AND always look at the upper limbs and arm swing. Yes, the central  nervous system is involved. It is more than just biomechanics, perhaps this is why this stuff comes easier to us because of our deeper neurology background. The whole is greater than the sum of the parts….