In this weeks Neuromechanics weekly, Dr Waerlop takes us from the cortex to the muscle spindle. The journey through the neuraxis continues….

So, the question you need to ask is why they cut the leg off and transplanted the foot/ankle 180 at the lower femur.

If you think about it, it is because he needed a joint to flex like his old knee.  If they put the foot on forward there would be no knee bend (ie. his knee would have only bent as much  as you can point your foot…….the motion of ankle plantarflexion.  This would have been extremely insufficient in range to move as well as this fella is moving. )

By doing a rotation transplasty and putting the foot on backwards he could take advantage of the large range of ankle dorsiflexion.  They talk about the toes alot in this video but this really has nothing to do with the success of this surgery, functionally anyways. The genius of this surgery was using the ankle as a knee hinge.

Pretty amazing stuff.  Enjoy the brain-twister in understanding how he is using ankle dorsiflexion to replicate knee flexion.  !!!!

taking Gait to another dimension……… Shawn and Ivo

Here Dr. Allen of The Gait Guys introduces some of the initial information necessary to understand proper shoe fit. Topics include body anatomy, shoe anatomy, physiology, biomechanics and compensation patterns. This was part of a private industry lecture where The Gait Guys were asked to help improve the understanding of the concepts critical to better shoe industry choices. 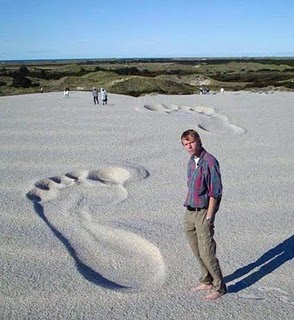 Ivo and Shawn …. what we do while you are sleeping.

our version of crop circles !

watch for signs of our presence at your local beach or wheat field near you !

you are not alone…….

As you can see, this individual lists to the R upon weight bearing on that side (midstance); did you pick up the increased progression angle of the foot on that side? How about the mild genu valgus?

Why would someone walk like this? There are a few plausible explanations.

1. he has a weak gluteus medius on the R side.

2. he has a R short leg and needs to lean to that side to get the long leg side (L) to clear.

3. impaired left ankle rocker (causing premature heel rise and left side early departure) could also cause him to accelerate onto the right as well.

His increased arm swing on the L is to help propel him forward, most likely due to weakness of the external obliques to assist in initiation of flexion of the thigh, and weakness of the gluteus medius, which also helps to propel the leg forward. He also does not push off adequately with the R leg; This is probably due to loss of hip extension and inadequate ankle rocker on that side.

Yup, you’re a geek!   We remain The Geeks of Gait…Ivo and Shawn

oh look, it appears (but a little hard to tell) ……but it appears we have a casualty !

here is what her ankle is saying …..

“oh no, we do not have enough ankle dorsiflexion to be on this bad boy…….so, who wants to take it guys…….. how about you hyperpronate Mr. Arch, and to help we will drive Mr. Knee medially.”  ?

better have enough ankle dorsiflexion if you are gonna play with this monster !

How are your eyes?

Test yourself on this video.

Why does this individual lean to the right during stance phase and have an increased arm swing on the L?

Ummm… What can we say? Make sure you watch to the end for the “Grand Finale”. She gets and “A” for effort though we can’t say she passed the gait exam…

Here Dr. Shawn Allen of The Gait Guys summarizes this gait problem in running form. The Cross-over gait is a product of gluteus medius and abdominal weakness and leaves the runner with much frontal plane hip movement, very little separation of the knees and a “cross over” of the feet, rendering a near “tight rope” running appearance where the feet seem to land on a straight line path. In Part 3, Dr. Allen will discuss a more detailed specific method to fix this. You will see this problem in well over 50% of runners. This problem leads to injury at the hip, knee and foot levels quite frequently. To date we have not met anyone who had a good grasp on this clinical issue or a remedy quite like ours. Help us make this video go viral so we can help more runners with this problem. Forward it to your coaches, your friends, everyone.
Thanks for watching our video